HOMED-funded research invented a new tool for the early detection of insect alien species. The tool successfully passed the first set of tests regarding alien species potentially traveling with commodities in containers.

Insects are one of the most common groups of invasive species, and the number of new introductions has been increasing in the last decades. Insect invasions are affected mainly by the increase in international trade, as most of them travel across the world inside shipping containers. The effectiveness of sticky light traps was tested for the interception of alien pests inside the containers. 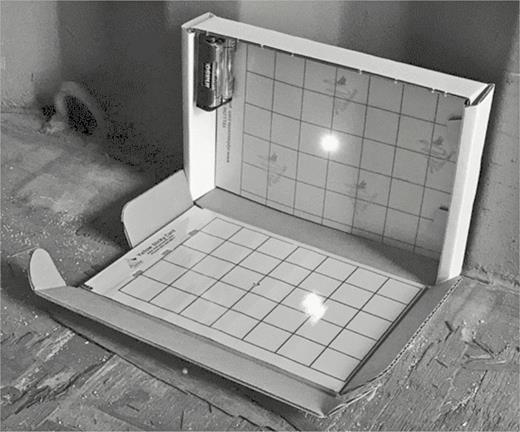 The tested hypotheses were that light traps have a valuable broad-spectrum attraction and their trapping performance differs between empty or loaded containers. The optimal trap density in a container was also investigated. Trapping tests were conducted on four model species: Cadra cautella Walker (Lepidoptera: Pyralidae), Drosophila melanogaster Meigen (Diptera: Drosophilidae), Sitophilus zeamais, Motschulsky and Ips typographus L. (Coleoptera: Curculionidae). Insects were released within a standard shipping container, in either empty or loaded conditions, where sticky light traps were deployed for 15 h. Traps were tested with the light on (activated) or off (control). Activated traps captured more Lepidoptera and Diptera than control ones, with no differences between empty and loaded containers. Instead, Coleoptera were rarely caught, probably because of their ability to escape from traps. Results show that higher trap density in the container (from 1 to 8) increases the probability of insect capture.

In conclusion, positive results on C. cautella and D. melanogaster suggest a possible application of sticky light traps against some small Lepidoptera and Diptera species flying in containers and infesting seeds, grains, and fruits, while traps need improvement for application against beetles.

The research by Matteo Marchioro, Andrea Battisti, Massimo Faccoli can be found here.