Science for Environment Policy issued its latest newsletter in July

The European Commission’s news alert service Science for Environment Policy has issued its latest newsletter on the topic "Trees at the edge: species respond differently to climate changes at hot and cold range edges". The text is based on an article by Kunstler et al., called "Demographic performance of European tree species at their hot and cold climatic edges", published in the Journal of Ecology. 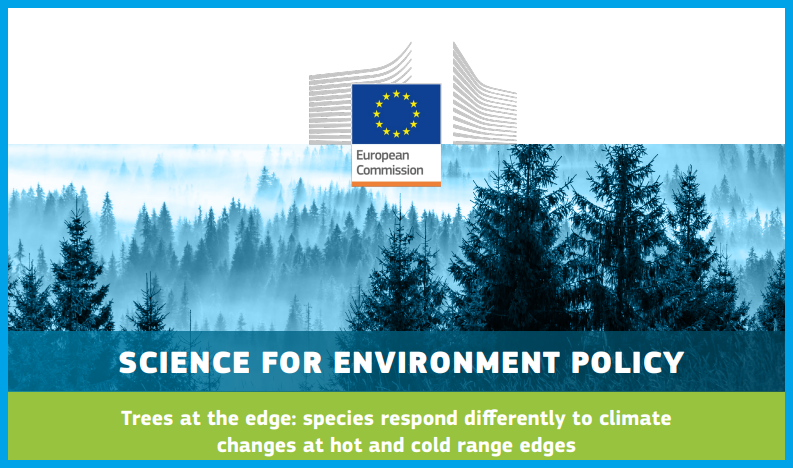 Due to climate change, there is a concern over how plant species will adapt in terms of their geographical distribution (or range). Research has identified conflicting patterns in species performance.

Understanding how plant populations respond at their ‘range edges’ — the outer boundaries at which a species is found— is crucial for forecasting the impacts of climate change. One long-standing theory in this area is the ‘abundant-centre’ hypothesis, which posits that a species’ abundance is highest at the centre of its range and declines towards the edges. In addition, the theory assumes that this decline in abundance results from a decline in population performance.

Using forest inventory data from over 90 000 plots across Europe, the researchers modelled trees’ response to climatic change for 27 species, with data covering more than 1 million adult trees from Mediterranean, temperate, and boreal biomes. The time between data points ranged from 4 to 16 years. They evaluated how species responses translated into the life trajectory metrics of lifespan and passage time (the time taken for a tree to grow to a large size) - metrics that scale up to reflect general population dynamics.

Researchers compared species performance at ‘hot and dry’ or ‘wet and cold’ climatic edges to those at the ranges’ climatic centre, and assessed whether any variations were tied to species’ biotic interactions (such as competition), stress tolerance, or functional traits (those that impact an organism’s fitness by affecting growth, reproduction or survival).The findings provide limited support for the ‘abundant-centre’ hypothesis that demographic performance is lower at climatic edges than at the centre of a species’ range; instead showing that decline in demographic performance is strikingly different at ‘cold and wet’ and ‘hot and dry’ edges. For most species studied, the response seen for both growth and survival metrics differed depending on tree size.

The results suggest that the view that the tree performance is equally constrained at the edges of all species is oversimplistic. Instead, the researchers posit that the performance at the edge depends on the edge and species characteristics. The researchers thus caution against the assumption that climate change will affect European tree species only at their range edges. They recommend that the traits and climatic position of the species need to be considered when modelling the impacts of climate change on key European tree species, and caution that negative impact might also occur in the core of the species range.

You can read the full newsletter here.