This press release has been published in EurekAlert! and in AlphaGalileo.

Over the last century, emerging diseases have progressively been recognised by the scientific community as the main threat to forest ecosystems. With increasing international trade and globalisation, the introduction of non-native species into new environments has exacerbated the problems of emerging pests and diseases worldwide. Additionally, other factors, such as climate change, further complicate matters by altering host-pathogen interactions, thus promoting the spread of diseases caused by native or non-native pathogens. 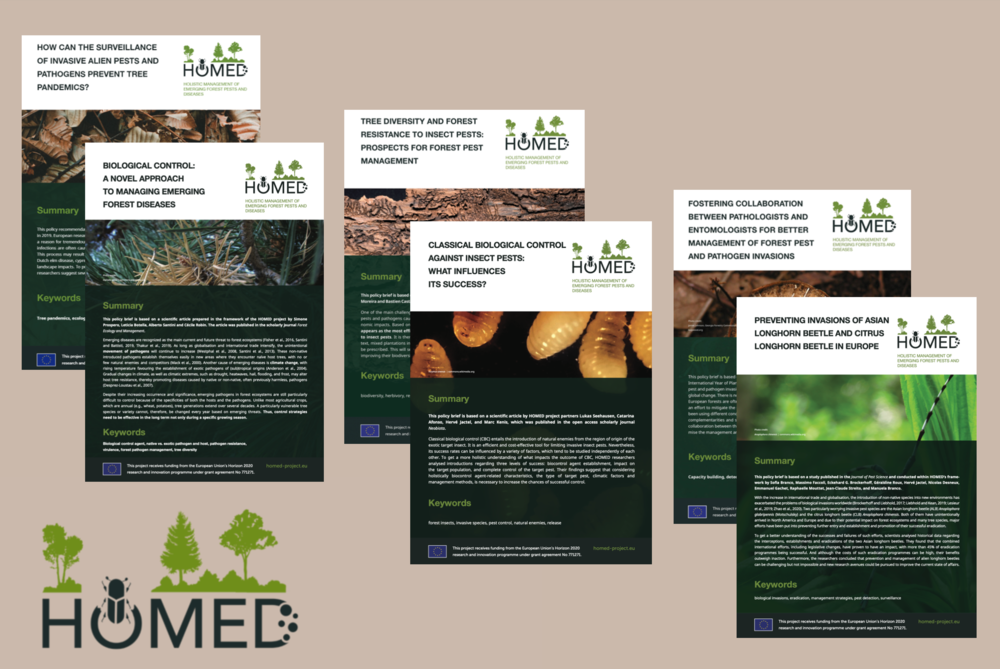 In this complex context, the EU-funded research project HOMED (HOlistic Management of Emerging forest pests and Diseases, grant agreement No. 771271) is dedicated to developing evidence-based policy recommendations that ensure the effective prevention, detection, identification, eradication, containment or control of emerging pests and diseases. As part of this effort, the project has a collection of policy briefs, specifically addressing policy-makers, and presenting them with well-defined insights, guidelines and possible solutions for different risks related to invasive forest pests and pathogens in Europe. HOMED’s collection of policy briefs has recently doubled in size, thanks to the publication of briefs number four, five and six.

The fourth policy brief, titled "Biological control: a novel approach to managing emerging forest diseases" is based on the article "Biological control of emerging forest diseases: How can we move from dreams to reality?", which was prepared in the framework of the project by Simone Prospero, Leticia Botella, Alberto Santini and Cécile Robin and was published in the scholarly journal Forest Ecology and Management. It provides suggestions on how to improve protocols and strategies related to the use of biological control in order to achieve an effective control of a pest.

With these three new policy briefs, HOMED now has six briefs available on its website, providing policy- and decision-makers with practical and comprehensive insights on how to employ innovative solutions in order to manage potential risks of emerging or invasive forest pests and pathogens in Europe.